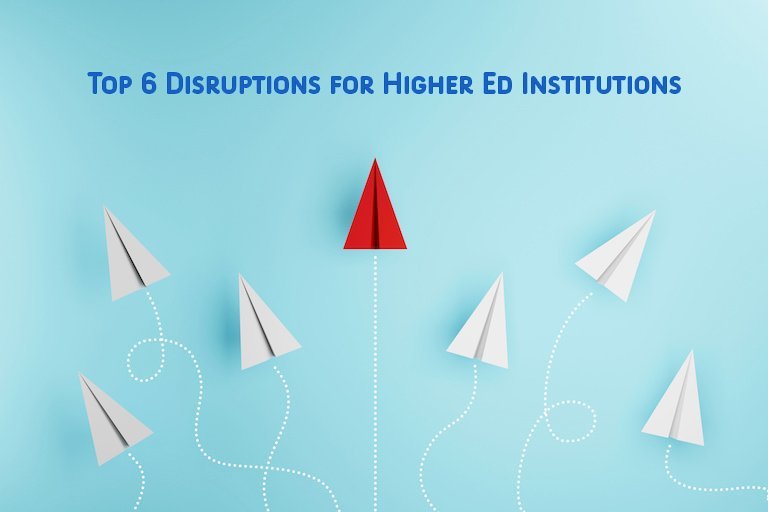 In this episode of Changing Higher Ed podcast, Dr. Drumm McNaughton and Dr. Larry Large, president of LD Large Consulting and president emeritus of Oglethorpe University in Atlanta, as well as a veteran higher ed administrator, discuss the six most pressing disruptions in higher ed today and how presidents and other leaders can think about and manage them.

A U.S. Army veteran, Large brings more than four decades of senior higher ed experience, including serving as president of Oglethorpe University and interim president of Sierra Nevada College and of Willamette University. He also has executive experience with the University of Oregon, the Oregon University System, and Reed College. He also was the founding president of the Oregon Alliance of Independent Colleges and Universities.

Quite simply, the demand side of the supply/demand equation favored higher ed during the period following World War II until about 2008, when the population of traditional college-age students declined. Furthermore, higher ed will face a true “demographic cliff” in 2026.

“Crises don’t bring up problems; they bring to light problems that are already there.”

There is a sharp distinction between the costs that colleges invest in areas such as infrastructure, overhead, and programs versus the price that students pay in tuition, net of discounting. Cost variables for the former have shifted as a consequence of the Millennial generation, and even more so Generation Z, who often bring an unprecedented sense of entitlement and expectations for amenities such as recreation and exercise facilities and increased medical care.

“Other institutional costs for which the variables are huge include campus safety, artificial intelligence, and other technology, and deferred maintenance.”

In addition, the federal Cares Act that provided institutions with funding during the pandemic often merely postponed the negative impacts of demographic trends, including institutional closures. The balance sheets of many institutions, both public and private, reveal a distortion caused by the pandemic by showing budgets for the last two fiscal years that are more balanced budget that is likely to continue into fiscal year 2024-25. Simultaneously, the pandemic accelerated the difficult overall trends in the business model, so leaders must be careful to project institutional trendlines without the effect of the pandemic.

Student loans, now at more than $1.7 trillion, continue to present a challenge, even though the media tend to distort the real picture by focusing only on the extremes. This issue is especially challenging today, given the Biden administration’s extraordinarily complicated strategy and proposition to make changes on behalf of those who have taken out student loans. This is a divisive issue, especially for those who paid off the loans they took on. The question now is how the issue will be managed moving forward.

Disruption #4: The Changing Role of Faculty.

Previously, faculty operated under a model of 40 percent effort toward teaching, 40 percent toward research, and 20 percent toward service. This has changed in recent decades as students have demanded more faculty attention in terms of personal counseling in addition to professional mentoring. While faculty typically lack the experience and expertise—not to mention the free time—to address student mental health problems, this is now an expectation adding to faculty burnout and institutional expense. How institutions move forward to deal with the crisis in student mental health will add considerably to the cost curve and will drive prices up in the fairly near term unless a cost offset is identified.

Disruption #5: The Infusion of Politics into Academia.

One example is found in Florida, where the state legislature recently mandated that state universities change accreditors every five years, which will add a financial burden of literally hundreds of millions of dollars to state university budgets. A more common example is the political influence on the makeup and role of governing boards. This is especially problematic for public institutions, where board members are appointed by the governor or legislature.

This raises the issue of members’ fiduciary duty: Is their primary responsibility to the state or to the institution? Further muddying the waters is the fact that many institutional governing documents are not explicit regarding these fiduciary duties. This, however, is a false dichotomy, since even at public universities, members of governing boards can be held accountable for both, at least until conflicts arise that complicate matters. The bottom line for higher ed leaders at nonprofit institutions is that members must first be responsible to the institution, then the public good.

The result of these disruptions is a historic level of institutional closures and mergers, with numerous, substantial examples in recent years in states such as Oregon and Vermont. The student population demographics are not evenly dispersed across the United States, and so the problems are not, as well. While Western states, for example, have seen less in terms of population decline than elsewhere, they still face significant challenges and have experienced school closures and mergers. The issue is especially difficult, and likely will result in an uptick in institutional mergers and consortiums of different kinds.

What Higher Ed Leaders Can Do Now

Action #1: Take on the Role of Teacher on Campus and in the Community.

Presidents and other executive-level leaders in higher ed are uniquely positioned to understand the scope and complexity of the disruptions facing academia across the nation. Thus, they also have a unique opportunity to educate stakeholders about the situation and the best steps forward.

Stakeholders include external audiences such as local chambers of commerce and media platforms. Reaching out to media representatives is especially important given today’s 24-7 news cycle that requires a continuous stream of content—which too often, unfortunately, means the more sensational, the better. Stakeholder education includes explaining the current situation and how the institutional environment has changed over time—especially since their own time as a student. Presidents and even trustees who invest the time to build relationships with stakeholders and explain in layman’s terms the demographic imbalances in supply and demand and cost structures could help mitigate misunderstandings that too often escalate into divisiveness.

A particularly important area of stakeholder education involves faculty. Presidents should invest the time to listen carefully to faculty to emphasize that their input is critically important given what some see as the erosion of the rich tradition of shared governance and the fact that most presidents today have only a short time—about five years, on average—to understand the institution and make changes. While presidents and board members may not agree with the faculty perspective, this input is invaluable in getting a high-level, long-term perspective of the institution.

Institutions should drill deeper to learn more about where institutional costs are found so that they can analyze them and make informed decisions. Today’s context of greater supply than demand tends to lead to a kind of “consumer (student) sovereignty” that skews the bottom line in terms of programs, degrees, services, and other areas.

Every campus should have a process that encourages and tests innovative ideas from trustees, staff, administrators, alumni, and others. This process should have in place a method for screening ideas and assessing their merits in business terms. While some ideas will not prove successful, this process will help leaders identify ideas that are truly outside the traditional box.

This is an area where the corporate world can greatly inform higher ed. Given the relatively short tenure of most presidents and some other senior administrators, leaders should make succession planning the foundation for a great number of strategic decisions.

Fiduciary responsibilities on the part of governing board members must be clearly defined from the outset, during a comprehensive orientation session that occurs before their first board meeting, or—ideally—during the nominating and selection process so that members understand the complexity and ramifications of the role.

Very specific metrics should be developed that answer basic questions such as accomplishments during the previous fiscal year and goals and assessment measures for the coming year. They should focus on the institution’s unique mission and span two or three years. This allows leaders and governing boards to identify real challenges and implement strategies that include accountability on the part of everyone involved.

Action #7: Be Transparent during Closings or Mergers.

More institutions will face difficult, existential decisions in the coming years. Presidents must be transparent with all stakeholders throughout the process and demonstrate dignity and grace in all activities. This includes finding custodial campuses where current students could transfer and making the process of transferring paper and electronic documentation to the receiving institution as seamless as possible.

A good example of stellar leadership in this most difficult of circumstances is found in the recent merger of Oregon’s Willamette University and the Pacific Northwest College of Art, which combined their interests in a way that protected the missions of each, with the result that per-student costs have decreased. In the case of consortiums, presidents should make sure that board members and administrators have ample time to meet with their counterparts to learn from each other and develop best practices to maximize the likelihood of success moving forward.