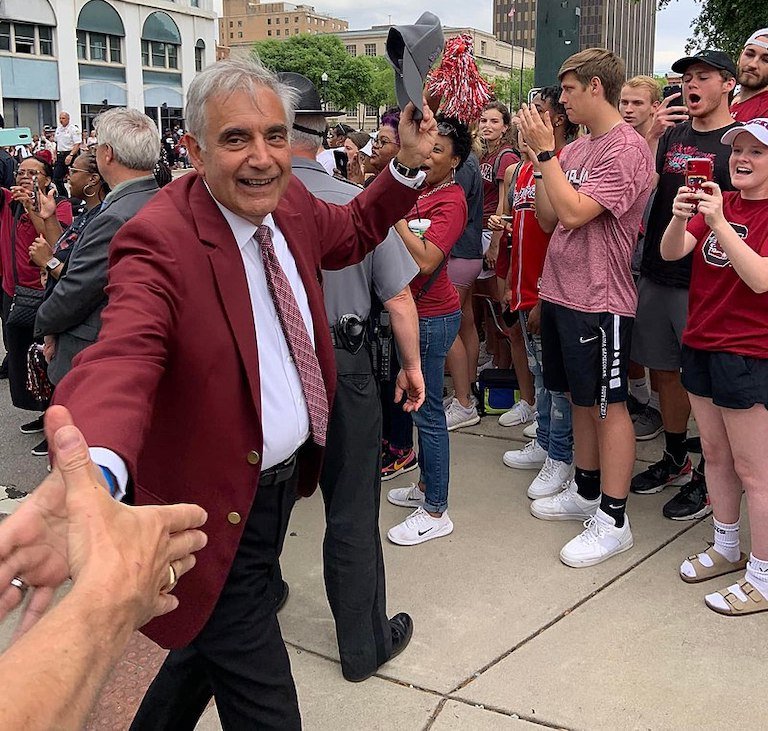 Former university president Dr. Harris Pastides is a leader’s leader – and the right type of leader for institutions of higher education in the 21st century. Over the course of his impressive career, he has spent time in leadership positions at the UMass Amherst and the University of South Carolina, where he first served as a dean, then vice president of research, and finally as president. Pastides was not only elected as president twice but was also the first internal candidate to be elected as president of the university in over 50 years – a testament to his expertise and the outstanding quality of his leadership.

His leadership style transcends the skill sets that once defined a qualified, capable university president. By leaning into his own authenticity instead of following any kind of conventional playbook, he has cultivated meaningful relationships with thousands of students based on trust, compassion, openness, and shared values.

Pastides’ caring and compassionate approach to leadership at the University of South Carolina has yielded trust, goodwill, and meaningful relationships with both students and faculty. His leadership style has also created positive, measurable outcomes: under Pastides, the University of South Carolina became the number-one honors college in the United States, as well as the top-ranking school in terms of student freshmen experience.

In the past, people would call on the qualities of financial management, strategic planning, and experience running a large organization. Those are valuable commodities that haven’t gone away. The skill sets and attributes that once defined successful leaders in higher education are still relevant, however, being capable and competent in those areas, Pastides explains, has nothing to do with the human side of leadership.

University leadership has both a managerial side and a human side. If a college president has those qualifications and doesn’t have the human qualities, Pastides says, they may not embody the type of leadership that people want to follow or walk along with.

In addition to these attributes, Pastides stresses the importance of creating relationships built on trust and integrity. By making it a priority to connect with students whenever possible, Pastides gained a reputation of being open – and that kind of reputation makes students feel more comfortable approaching a leader, even if they haven’t met them personally.

Learn to Lead from the Middle

Pastides defers much of his success to the people around him, and he likes to say that he leads from the middle, not from the front.

“If you’re in the military, you better lead from the front. But I prefer to be somewhere in the middle, letting other people that I’m walking and moving with take the lead occasionally.”

The idea of leadership as a process of walking with others – and not always in front of them – means that leading doesn’t always mean taking the lead in Pastides’ perspective. This fundamental tenet of his philosophy exemplifies Pastides’ collaborative and compassionate style of leadership.

Integrity, patience, humility, and being a good listener – qualities that students ought to be developing themselves during their college years – are also essential attributes of leaders in higher education today. These traits build relationships of trust, dependability, and goodwill over time and through consistency.

Pastides jokes that students often stop by his office claiming that he had promised to spend time talking with them. With 37,000 students on the main campus, he did this so often that his schedule was interrupted on a regular basis. Nonetheless, he would take 20 minutes or so with each of them.

“Many people would say it was a waste of time. But I view it like putting a coin in a piggy bank. You amass goodwill and trust, and you really need that when times are tough – when you have to raise tuition, or when you know you can’t rename a building that people would prefer that you do – they remember that you’re a good fellow. And you draw on that bank account later in time.”

How to Lead in Times of Tragedy

In 2019, tragedy struck the University of South Carolina when a student was killed after getting into a car that she believed was her Uber ride. Pastides and his partner, Patricia, heard the news early the next morning. When he was informed that the family had already arrived and were at a nearby hotel, he didn’t hesitate. Not knowing what to say, he reached out to them anyway. He just talked to them like a family member and they continue to talk today.

Pastides didn’t stop there. He was also the driving force behind several campaigns, including the nationwide “What’s My Name?” campaign. He asked every college student in America to pledge that they would not get into a rideshare vehicle without first asking the driver, “what’s my name?” to verify that they were getting into the right car.

Under his student-centered leadership, the university responded to this tragic incident with impactful efforts to enhance the safety of all students nationwide. The school also resolved to be a better institution afterward. “There was no playbook for that,” Pastides says.

Training the Next Generation of Higher Education Leaders

Pastides has contributed to the creation of training programs that create pathways for colleagues to become bosses. These programs, both formal and informal, are intended to create ways for individuals in all areas of academia to bolster their skills. Ultimately, the idea is to create a much more robust pool of candidates for all institutions.

Graduates of these formalized training programs, he notes, don’t always choose to stay at the institution, and Pastides acknowledges that reality with a level of grace that embodies his character as both a leader and a human being:

“If you’ve created a great opportunity for a young or emerging leader and they take a job somewhere else, I think that’s okay. Because you’ve done something wonderful for them.”

The “What’s My Name?” Organization