The Wisdom of a Tuition Reset at St. John’s College 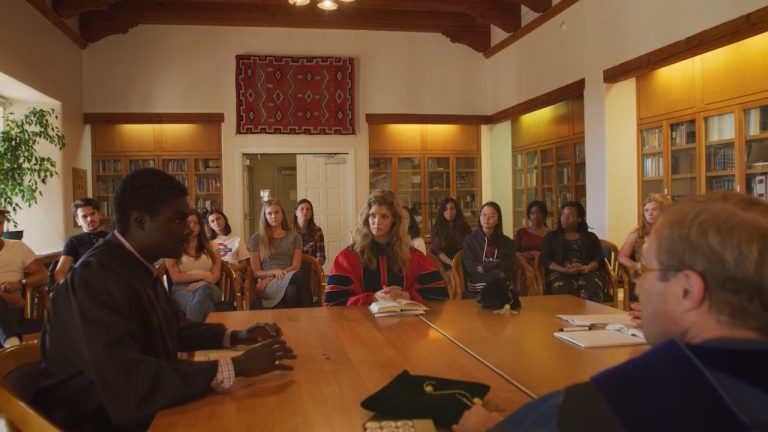 The wisdom of a tuition reset at St. John’s College, which has a total of 850 students who attend its two campuses, located in Annapolis, MD and Santa Fe, NM is paying off. Will others follow their lead?

Although this tuition reset has been a challenge in relation to higher education change, college leaders feel that the positives outweigh the negatives.

St. John’s prides itself on being contrarian, resisting many ill-advised trends that emerge in higher education. However, the institution and its leaders were embarrassed that it had participated in an astronomical increase in the sticker price of college, eventually reaching a $55,000 annual tuition rate, which is higher than the average family income in New Mexico. The institution’s administration, faculty, and staff believed that many students who otherwise would be interested in pursuing the college’s distinctive liberal-arts education were not even considering the college because of the high cost.

Many cautioned St. John’s against doing a tuition reset because the perception would be that the college had lowered the quality of its educational product. However, the advertised cost of college needed to come down. St. John’s also has ample scholarship aid available, even as the college cut its tuition to $35,000.

St. John’s College is unique; its curriculum is based on the “classics.” The curriculum is nearly all-required, with only a few electives allowed during the senior year. Students take a challenging course load (all concurrently) that includes Greek, advanced physics, calculus, and philosophy, and they only read original source material (no secondary materials) and discuss them in small (18 students per class) seminars.

The college doesn’t have “professors”; there are no lectures or adjunct faculty. Instead, faculty are called “tutors” because they use the Socratic method to lead seminars. Each class involves two tutors with 18 students. Additionally, faculty do not specialize; instead, they teach across the curriculum.

This educational approach totally flips the classroom, so that questions that are asked are an invitation for the faculty and students go on a journey together. The college’s campuses offer no fancy dorms or other frills; instead, money is spent on what is happening in the classroom.

The biggest social event of the year at the Annapolis campus is a croquet match against the U.S. Naval Academy. Waltzing and crew are also important to students on this campus. The Santa Fe campus, because of its location, enrolls students who are drawn to the many outdoor adventures afforded by the campus’s home in the Rocky Mountains and to the arts and culture environs of Santa Fe.

St. John’s administration discussed the tuition reset at great length and read case studies. They decided that they needed to go all-in or step away. While the Board wanted to understand the gains and deficits, there wasn’t much dissension. Instead, trustees, campus leaders, faculty, and staff agreed on what the institution needed to do.

Sometimes higher education needs to step back and think about what it’s communicating to stakeholders. In general, the higher education industry wants to communicate that it has something valuable to offer. However, does the price tag need to be beyond the means of almost every family that wants to enroll a student?

While many families who have some level of college experience realize that the sticker price is not what is going to be paid, first-generation students and their families don’t have that understanding. They may decide to send the student to a community college, even though the student may yearn to attend someplace like St. John’s or another liberal arts institution. Higher education is becoming a luxury instead of an educational necessity that prepares students with critical thinking skills to navigate a tumultuous job market.

The Data on College Affordability

The college did not have many full-pay students at the old tuition rate of $55,000. While St. John’s won’t know exactly how the decision to do a tuition reset will play out over the next few years due to COVID, the campus is slightly revenue positive and has seen an increase in its applicant pool. The institution focused on increasing the band of families who are upper-middle and middle-class who became more interested in St. John’s due to the tuition reduction. The institution continues to give significant needs-based aid.

The leaders coupled the announcement of the tuition reset with an expressed recognition that the college would be more dependent on philanthropy to run the college. St. John’s leaders surveyed alumni, many of whom said they probably could not send their own children to the college. Therefore, there was a great deal of receptivity within the alumni to doing the tuition reset. Fortunately, St. John’s has an alumni base that can help meet the capital campaign challenge. This served as a rallying cry for college affordability for future generations.

St. John’s is undertaking a capital campaign called Freeing Minds, which doesn’t include a new program or a new building. The campaign is designed to make St. John’s education more affordable so that the high level of liberal arts education can continue to be offered. The campaign already has raised $250 million of its $300 million goal.

The capital campaign kicked off simultaneously as the institution began the tuition reset. Now the college’s endowment is around $240 million and is headed to $350 million. This will cover 20-25% of the college’s operating expenses.

A St. John’s education costs approximately $60,000 per year, so a full-pay student gets a 50% subsidy from the endowment draw. The college also has other revenue sources, but the educational model with a quality tutor at the center ( and no adjunct faculty) is expensive.

Communicating about the Tuition Reset

The rollout of the tuition reset had significant complexity. There was some blowback from recent graduates. Additionally, scholarships were reduced as the tuition was reduced for existing students; in some cases, these scholarships dropped from $20,000 to $5,000. However, the net tuition that students paid (after discounts) either stayed the same or dropped. This is what was conveyed to current students

In comparison, incoming students just had good news, as did some existing students who saw a reduction in tuition. These varied situations required St. John’s leaders, faculty, and staff to have individual conversations with students and their families.

Prospective students and families also had a different conversation as the college shared that while their cost had gone down, the quality of education remained. This change gave St. John’s recruitment staff the opportunity to open the conversation in a new way. Additionally, the recruiters and enrollment staff could point out to families that if they felt the new tuition reset was still out of financial reach, the college had needs-based aid.

The college did its tuition reset prior to the emergence of the pandemic. St. John’s hopes not to have to raise its tuition moving forward; however, there may be a need to do small increases over time.

The lesson that St. John’s leaders, faculty and staff have learned is not to be scared off by making big changes. Higher education needs to be bold and put aside the pundits’ views, especially those around not doing tuition resets. It’s important to ask whether the published tuition suggests that the education that is offered is beyond students’ and families’ reach, even with discounting and scholarships. Transparency is essential and it’s important that college officials come across as sincere, authentic, and not preachy.