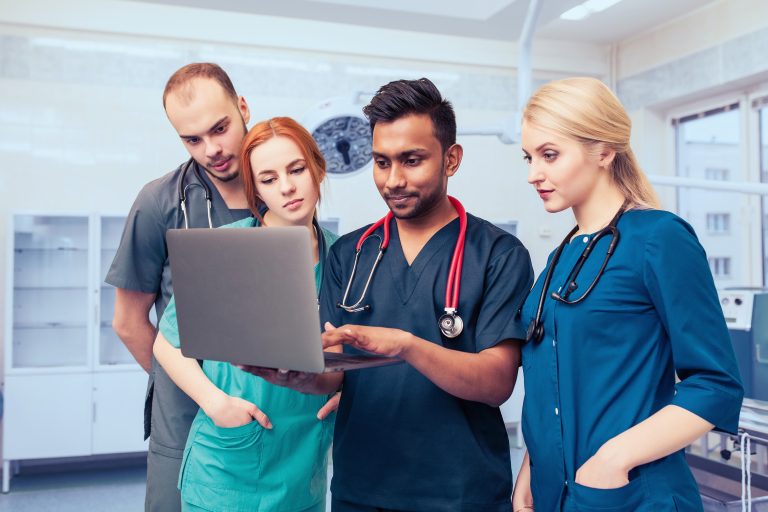 In this podcast, Dr. Drumm McNaughton and Dr. Michael Horowitz discuss how TCS Education System’s forward-thinking approach to growth and sustainability has made a big impact on students, the community, and the medical education system.

With the recent addition of the Kansas Health Science Center (KHSC) and the related Kansas College of Osteopathic Medicine, TCS Education System now has five colleges and universities across the United States. These schools serve students across the United States who can participate in TCS’s offerings, many of which are online because of the system’s investment early on into technology. Additionally, TCS’s institutions do offer some options for in-person classes. This also meant that as these new additions come online, TCS already has serves some students in Kansas.

The system is 100% nonprofit, which is part of TCS’s secret sauce for growth and sustainability.

The system practices radical cooperation, which breaks the higher education mold of competition and turf wars. TCS’s radical philosophy is that colleges will do better through working together in an integrated, all-in manner.

Since the system started in 2009, the four initial colleges have doubled in size. Now with the addition of KHSC and its connected Kansas College of Osteopathic Medicine (KCOM), TCS will begin its biggest project to date.

TCS runs the back-end areas to allow the institutions to focus on educational delivery. The system office does not include faculty or most of the student-facing personnel.  Yet TCS’s approach has evolved past these efforts, which are being hidden in the background.

This approach also is changing as the system grows and evolves. The initial vision was to bring colleges together to create a comprehensive model, including governance, so they can thrive together. Leaders have determined that there was so much more that could be done at scale and collaboratively.

While initially, this approach involved the back-end pieces, now the system is starting to oversee some student-facing areas such as student finance. This is because it has found that institutions function better when there is a deep team of student finance professionals. Some of these individuals work behind the scenes while others interface with students on day-to-day issues.

Additionally, there is a high degree of collaboration between faculty at different schools. Once a year, TCS has 100 faculty from each system institution assemble to learn from each other and executing shared classes, joint programs, and international projects.

TCS is very similar to a state university system but not part of the state. TCS is unique because it is a non-profit and private. However, this approach matches Horowitz’s vision. TCS doesn’t have campuses; instead, it has distinct colleges and universities. The system is an integrative system with a head and a system board, while there are separate boards for each college and university. As TCS chases after the nearest fit, this approach helps potential institutions to realize that TCS is more than a back-end part of the organization.

Facilitating Innovation for Growth and Sustainability

TCS has served as an incubator for the Kansas Health Science Center.  This reflects TCS’s boldness and willingness to innovate because the system has always been willing to break the mold and try something new. Medicine was in Horowitz’s initial vision for the system when it launched. After spending nine years trying to find a medical college or university that would be interested in joining TCS, Horowitz and his team began exploring other options – including creating a medical school from scratch – in 2018. The TCS team searched the entire United States, going down some rabbit holes while also visiting some great communities, in trying to find the perfect place for a medical school that also had community buy-in. They narrowed their search to two locations. One in the Southeast where the community was gung-ho and a university that was willing to host a medical school. The second involved an introduction of the TCS team to the nascent KHSC in Wichita, Kansas, which was determined to be a great opportunity to create a meaningful project.

Community impact is important in TCS’s formula, and when interviewing colleges, the system’s leaders assess that support. In KHSC’s case, there was one powerful interaction with the Riverside Health Foundation, which turned the tide of this decision.

This foundation has been supporting medical education for years. Foundation leaders were willing to give KHSC $15 million to launch the medical school if the circumstances were right for the nascent organization to thrive. TCS was introduced to the foundation leaders as a potential collaboration. Soon thereafter, the foundation agreed to do a 3-way agreement and has given the $15 million. This is the largest donation that any of TCS’s colleges have received. This also has expanded TCS leaders’ viewpoint in that talking to communities also can mean interacting with specific groups who are interested in supporting a particular institution or activity.

As Horowitz and the TCS team searched for a medical school, he heard from colleges and universities that there was no need for an additional medical school. This thinking is common in higher education. These institutional leaders think that new services are needed until they crossed the threshold, and then that’s enough. However, this doesn’t make sense, especially when the U.S. is importing medical personnel from other countries while also having the greatest capacity to educate more physicians in the United States.

Higher education also claims there are not enough training slots; however, this also is not true, especially given the shortages of doctors throughout the country, and especially in rural America.

KCOM is the first program or college of the larger institution, KHSC. This center serves a rural area of the nation, which has a significant shortage of healthcare providers. In fact, Kansas is 40th in the country in access to a physician. This need has led to unprecedented support across the state of Kansas. Every student should be able to get the training they need within the first four years in the state; there also may be out-of-state options. However, TCS has exceeded the requirements for state-wide training sites for accreditation. This has been due to a connected board of trustees, who are physicians located in various settings across the state.

Rural medicine is becoming more dependent on technology since it is impossible with the current shortage for rural doctors to travel to their patients and vice versa. To meet this need, TCS is redefining physicians through embracing technology full-on while also using the standard osteopathic medical curriculum that involves patient care. This is the first generation of physicians who will train in telemedicine as a primary way to interact with patients.

For example, in rural areas, hospitals may have one physician, who needs to be able to handle a variety of issues, ranging from delivering babies to substance abuse to comforting grieving people to conducting house calls. However, the specialists will need to connect via technology from other areas (or states, in some cases) to serve a patient.

TCS as a system has a significant number of healthcare programs; in fact, it is the biggest educator in mental and behavioral health. Three of the system’s colleges educate in those programs. TCS also has a law school that is doing a hybrid JD.

To do this, TCS relies on an integrated technology team involving campus and system staff who work with TCS’s CIO. This team works with industry leaders in Silicon Valley and an institute connected to Disney on a variety of innovative ways to use technologies such as AI. For example, KCOM will be one of the first schools to use technology to teach the anatomy/biology class instead of using cadavers.

TCS’s faculty and students are mastering the use of technology for simulation and parsing out knowledge self-paced, instead of focusing on a select set of skills that must be done in person. Everything learned in developing the medical school will be used in the nursing curricula as well as psychology and behavioral health. These experiments with using technology and healthcare education have been going on for several years in these areas.

This in turn will influence technology’s use, not only in education but in the careers that students will be moving into. Additionally, students learn how to work effectively in the clinical setting as well as how to incorporate emotional intelligence into their practice.

While there is concern that technology is removing the reality of working with the body, especially in anatomy/biology, practicing physicians will point out that most doctors will never do surgery. Surgeons will only do this. Therefore, it’s important that medical students focus more on working in the clinical setting. Additionally, medical students will continue their training for several years after graduating from medical school.

This explosion in technology has implications for other schools beyond medical school. TCS plans to double down on retention and completion, which is already strong. They plan to use AI to analyze what the success factors are for learning and completing a program. This is no different than medicine; higher education can get as much Google and Microsoft technology, but it still comes down to people who intervene based on that knowledge. Technology will not create a solution; instead, people must define the problem, train people and talk to the technology people who are developing these efforts.

Because TCS is using a cooperative model, the system CIO is in the mix with the academic leaders in making key decisions. For example, the system’s law school already is developing micro-credentials and coursework that blends law and technology. Business schools also need to find ways to blend coursework with technology.

AI and other types of technology also can help students reach graduation by identifying areas where the student is facing challenges. This information can alert college staff, who can assist them with those issues, whether that’s academic, financial issues, or childcare. However, higher education has not found the magic bullet yet and more work needs to happen in this area.

TCS institutions will continue to grow – and additional colleges and programs will launch from the system’s current milieu. For instance, the Chicago School of Professional Psychology is looking to broaden into nursing and related healthcare fields. Pacific Oaks is working on its first doctoral degree. Saybrook University is looking at opening a program in art and design. Additionally, healthcare programs will emerge at KHSC and joint degrees between TCS’s colleges will emerge. Additional mergers and acquisitions are being considered.