Innovation in Mergers and Acquisitions With 3 Universities 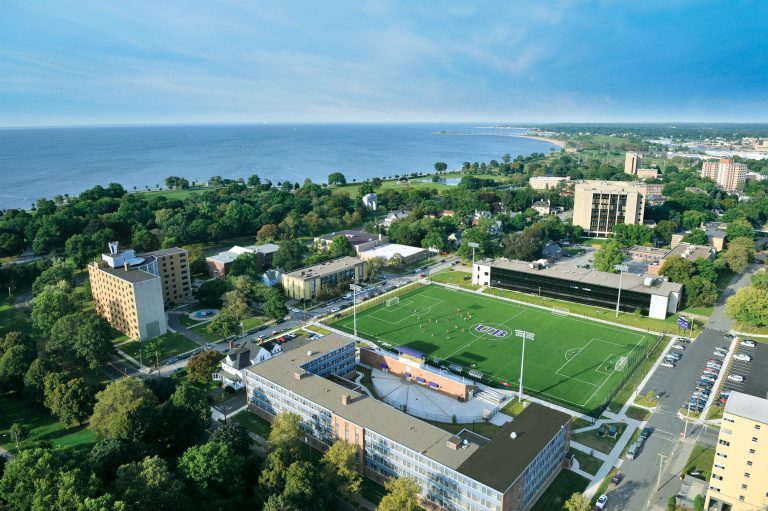 Innovations in mergers and acquisitions took place when three universities’ plans took a scenic route through the process.  The 2020 plan to merge the University of Bridgeport with three institutions – Goodwin University, Sacred Heart University and Paier College of Art – was considered an innovative model. However, as the effort began to unfold, one of the partners had a change of heart, which caused this effort to go in an unexpected direction. Now, the University of Bridgeport, which was founded in 1927, has new life and is working closely with Goodwin University to create innovative programs that leverage both institutions’ strengths.

However, after a year of discovery and conversation, that plan was rewritten. In Fall 2020, Sacred Heart’s leadership withdrew from the agreement. Goodwin decided to take over the programs allocated to Sacred Heart while Paier remained with the programs that they initially selected.

The University of Bridgeport also benefits through sharing the backend processes with Goodwin. An additional benefit is the good publicity with the City of Bridgeport, students, and alumni, all of whom were initially heartbroken when the initial deal was announced. This decision to keep the institution open allows the university to continue to serve students, alumni, and many in the Bridgeport community in a robust way.

Another benefit is how the University of Bridgeport and Goodwin are leveraging strengths. While they have similar missions, the University of Bridgeport and Goodwin have their own distinctive brand and student populations. By keeping those separate, both institutions’ assets are well leveraged. The institutions are sharing back-office capacity in some things to gain efficiencies and creating some joint programs – especially online – that utilize faculty from both institutions. This cooperation creates curriculum innovation through partnerships that leverage assets from both institutions creating a better product for students. It also made more sense to maintain both brands, which were well-known and respected in the area, rather than to lose their competitive advantages.

This effort to create organic collaborative efforts is happening at all levels: administrators, faculty, and staff. They are trying to identify areas where they can support each other and leverage their knowledge and skills as well as assets. For example, the career services offices at all three universities hosted a joint career fair, which led to much broader participation by employers. This fair also created extended time due for specific fields of study since all three institutions were participating.  This combined effort also led to stronger student participation.

One of the brightest spots of the new structure has been watching the two Faculty Senates work together and collaborate on projects. For example, there have been significant conversations about aligning general education courses so students can easily move back and forth between the institutions. There also have been discussions about merging the institutions’ diversity, equity, and inclusion initiatives.

Building Trust During Mergers and Acquisitions

The transition took a lot of work and conversations, all of which were designed for building trust with and among the stakeholder groups. To move into this new future, a leadership team met weekly, as well as a transition team from both institutions was formed and met regularly to coordinate merger activities.

Goodwin’s leaders hosted town hall meetings every other week to provide updates to the stakeholder groups on both campuses, and to the community at large. Once the scope of the efforts with the University of Bridgeport became apparent, Goodwin started hosting town halls for their faculty and staff as well. Agendas were developed using an anonymous survey where faculty and staff from both institutions could ask questions, and these questions and concerns were addressed during the town halls at both institutions. Consistency and transparency in messaging was critical for these efforts – the same messages were given at both institutions’ town halls.

Additionally, the institutions’ Faculty Senates had specific conversations focused on the decision to keep the University of Bridgeport alive and build a partnership with Goodwin. These conversations enabled these faculty to facilitate curriculum development and create lift for this new phase of the partnership.

Town halls were also held for students, especially those attending the University of Bridgeport. The leaders sent out surveys in advance to gather students’ feedback and questions. There also were separate meetings for graduate and undergraduate students.

Working with Accreditors in the M&A Process

A key part of the process involved open and transparent conversations with accreditors. These conversations included over a dozen programmatic accreditors, the state’s office of higher education, the New England Commission of Higher Education (NECHE), and the U.S. Department of Education. These groups gave guidance to the institutions every step of the way and were supportive.

Because of the unique nature of this initiative, the University of Bridgeport and Goodwin University are participating in a pilot program with NECHE. This pilot, which allows institutions to work on a unique project that doesn’t fit neatly into the accreditation process for up to four years, gives the two universities the wiggle room needed to find balance.

Additionally, the Connecticut Office of Higher Education and the U.S. Department of Education has been supportive of this new phase. The Goodwin University – University of Bridgeport effort is new and different, which prompted rich conversations with policymakers in moving this relationship forward.

The transition from what is being called “old UB” happened at the end of June, and “new UB” began on July 1, 2021. This transition required significant changes to policies and procedures. For example, every UB employee had to reapply for their positions so there was no automatic transfer. Instead, this was a deliberate process of moving employees from one institution to the next.

Additionally, a new board was put in place. The previous board realized that the current path was not sustainable and was thoughtful and reached out to find a new path. While several of the previous trustees continue to serve, this new board is more diverse and reflective of the community of Bridgeport and the students who attend the institution. There are more women as well as a representation of different professions on the new board.

The new UB also will no longer offer tenure and will require faculty to teach year-round on a trimester schedule. Faculty will receive built-in vacation during trimester breaks and can request release time to work on curriculum, research, or other projects.

The transition time also offers the opportunity for both institutions to pause and reflect on which policies and procedures will work well moving forward. For example, a number of UB’s business processes come from Goodwin University. However, some UB policies and procedures will remain intact. This reflection period also will allow both institutions to learn from each other.

Faculty from both universities are reviewing the faculty handbook together and working together to create joint degrees. For example, Goodwin’s master’s degree in education, which has a distinctive brand, is rooted in universal design for learning and is offered through an institute so both institutions are moving toward embracing that curriculum. In comparison, UB has a strong master’s in public health, so Goodwin is shifting to use that curriculum.

How the M&A Process Renewed Energy and Support

This new phase is creating a renewed energy and support on UB’s campus. UB will host its first town hall meeting in July, which will bring people together to forge the future.

Alumni are delighted that the University of Bridgeport will remain in existence and have reached out through social media and to the advancement office. The UB campus plans to invite the alumni back during homecoming in the fall to celebrate the university’s new chapter.